Submission to the Report on Gender, Sexual Orientation and Gender Identity

I am a Professorial Fellow in the School of Social and Political Studies at the University of
Melbourne, where I taught from 1991-2015. I now live back in the UK. I have written 11
books on feminist and lesbian feminist theory and politics including Gender Hurts: a
feminist analysis of the politics of transgenderism (2014) and numerous journal articles and
book chapters on transgender politics. I have been active in feminist work nationally and
internationally for 5 decades.

Aim of this submission:

To show that the concept of ‘gender identity’, when it implies that men can be included in
the category women, threatens women’s sex-based rights.

The importance of language

A reconsideration of the language used in UN documents that relate to women and
sexuality is urgently needed. This report is unlikely to help, however. The opening
paragraph of this call for submissions, entitled ‘Background’ is fundamentally confused
and unfortunately this confusion continues throughout the document. It starts with the
understanding of the difference between sex and gender that was, till the last decade,
accepted in the human rights community i.e. that sex is biological and gender is a social
construct. Gender is a harmful social construct, which is called in CEDAW, ‘stereotyped
roles’. Indeed, Article 5 of CEDAW says that ‘States Parties shall take all appropriate
measures’, ‘To modify the social and cultural patterns of conduct of men and women, with
a view to achieving the elimination of prejudices and customary and all other practices
which are based on the idea of the inferiority or the superiority of either of the sexes or
on stereotyped roles for men and women.’ Sex stereotypes are not something to be celebrated but to be abolished in order to create women’s equality.

The clash of rights

In the UK, as in many countries presently, there is a struggle taking place between those
who believe in ‘gender identity’, and it is a belief rather than a matter of material reality,
and a newly revived feminist movement which has developed precisely in reaction to the
attempts to protect ‘gender identity’, particularly self-identified ‘gender identity’, in law. This new movement consists of hundreds of organisations and many thousands of individual feminists who are engaged in legal action, in petitions and submissions and much on the ground education work to protect women’s rights from the incursion of men with female ‘gender identities’ into women’s spaces and opportunities.

The recognition in law of ‘gender or ‘sex stereotype’ ‘identity’, where this means that men can claim to be women, creates a very serious clash of rights. Women’s human rights are based on sex. The inclusion of men with sex stereotype identities within the category of women threatens women’s human rights on many fronts. It enables men to enter all the spaces set aside to protect women’s dignity and safety such as toilets, changing rooms, and prisons. It enables men to take advantage of all special measures
which seek to increase women’s representation in politics such as all-women shortlists. The idea that people might have ‘gender identities’ has been extended to children with the effect that thousands of children have been treated with harmful puberty blocking drugs, cross-sex hormones and surgeries (Jeffreys, 2012). This practice has been seriously curtailed in the UK by a court case taken by a young lesbian who has ‘detransitioned’, Keira Bell, and led to an opinion that children cannot consent to these treatments and, if under 18 years old, would need the permission of a court to proceed (Transgender Trend, 2020). That which the document calls, in question No 11, ‘gender ideology’ has led to sexual education programmes in schools in the UK and many other countries that tell children that it is possible to change sex which can lead to serious harm to their developing bodies, such as infertility, and harm to their life chances.

Some of the most energetic transgender rights activists who promote the notion of ‘gender (or sex stereotype) identity’ are involved in a campaign to silence the women and organisations which seek to illuminate this clash of rights and protect the sex-based rights of women. This is increasingly taking the form of ‘hate speech’ legislation and
‘conversion therapy’ legislation which are likely to prevent women from saying that
biological males with gender identities are actually men, and from questioning the conversion of young lesbians into heterosexual boys through drugs and surgery. There are many examples of women being sacked, receiving threats, being arrested or visited
by the police and being taken to court for saying that men cannot become women. The
campaign to intimidate women into silence is being waged against women politicians in
particular. This campaign includes the hanging in a tree of an effigy of the Deputy Prime
Minister of Spain, Carmen Calvo, on 19 February 2021 because she was critical of legislation allowing men to self-identify as women (El Comun, 2021). No other rights
campaign in history has proceeded through threats and intimidation which extinguish
the human rights of others to freedom of expression. This is something very different.

The legislation and policymaking that has taken place in the UK and other countries has
been deliberately clandestine in order to avoid the possibility of critical public scrutiny. Transgender rights activists in some cases advocate stealth campaigning to achieve policy change (IGLYO, 2019). Women’s and feminist groups have, in many cases, not been approached to make submissions. Where consultations have been public such as that on the UK’s move to pass self-identification legislation, this has engendered fierce opposition from women and feminists.

A fundamental problem with this document is that it runs together sexual orientation and gender identity. As a lesbian feminist who has researched and written on lesbian feminism amongst other topics of sexual politics for several decades, I am aware of the great importance of lesbian and gay rights. They need to be protected. The running together of these two concepts seriously undermines the ability to protect lesbian and gay rights. Lesbians and gay men are attracted to persons of the same sex, and that
attraction has nothing to do with gender. Lesbian rights are seriously harmed when men
with female ‘gender identities’ pretend to be lesbians and penetrate lesbian spaces,
such as dating apps, and pressure lesbians to allow these men sexual access. Male gay
rights are harmed when they are pressured to engage sexually with women who have
male ‘gender identities’. Young lesbians and gay men who are diagnosed with ‘gender
dysphoria’ are being converted through drugs and surgery to be heterosexual. One study from the UK found that only 8.5% of girls referred to GIDS (Gender Identity Development Service) described themselves as ‘primarily attracted’ to boys (Griffin, Clyde, Byng and Bewley, 2020). The protection of ‘sexual orientation’ rights, which are
based on ‘sex’, is undermined by the association with ‘gender identity’ rights and this
association should be severed.

At this time there is an urgent need to protect women’s right to free expression and for the UN to take notice of what women are expressing, i.e. the need to protect women’s sex-based rights from the incursion of men with ‘gender identities’ into the category of women. The tinkering with language to include men’s interests in that which concerns
women should be brought to an end.

Submission to the Report on Gender, Sexual Orientation and Gender Identity

Gender is a harmful social construct, which is called in CEDAW, ‘stereotyped
roles’. Indeed, Article 5 of CEDAW says that ‘States Parties shall take all appropriate
measures’, ‘To modify the social and cultural patterns of conduct of men and women, with
a view to achieving the elimination of prejudices and customary and all other practices
which are based on the idea of the inferiority or the superiority of either of the sexes or
on stereotyped roles for men and women.’ Sex stereotypes are not something to be
celebrated but to be abolished in order to create women’s equality.

The WHRC submission focusses on the way in which any legislation which
enables men with female gender identities to enter the category of women
threatens women’s human rights. It argues that the introduction of the concept
of ‘gender identity’ to legislation in any way is in violation of the UK’s
obligations as a party to the Convention on the Elimination of All Forms of
Violence Against Women (CEDAW) 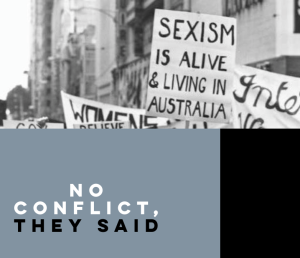 Open letter: Stop the harassment of women in academia

University of Melbourne must oppose all forms of targeted harassment against staff members engaged in the protection of women’s sex-based rights! To: Prof Duncan Maskell (Vice Chancellor) and Prof Russell Goulborne (Dean of Arts)   We are